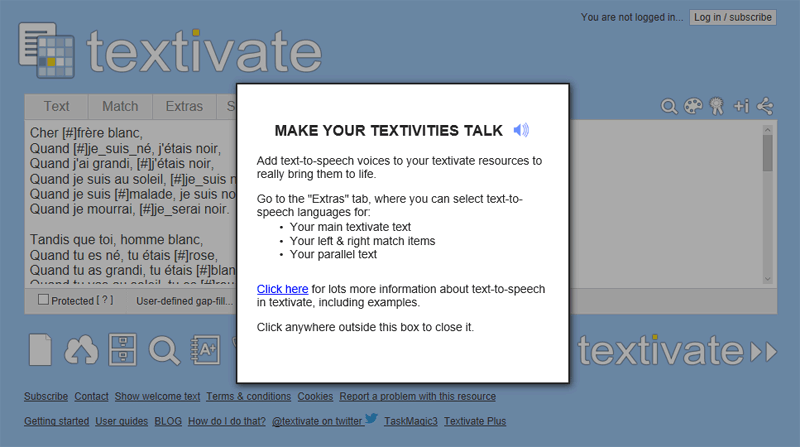 Something new has appeared in the "Extras" tab on textivate...

We've added some new Text-To-Speech (TTS) functionality (using a third-party API from responsivevoice.com). It should work on all devices. (See the "Compatibility" section at the foot of this post...)

As you can see in the image above, this new feature allows you to select a language for...

If your students are using textivate to help them learn their own texts, they can also add TTS to their texts :)
(Although, as I'm sure you are aware, text-to-speech isn't always 100% perfect...)

TTS on the menu screen

If TTS languages have been specified for a resource, you should see little grey speakers appear after each paragraph of text and after each matching item.

Here is a link to the menu screen for the French resource examples provided below: https://www.textivate.com/menu-6ovjn1

N.B. If you are editing or creating a new resource, these will only appear if you are logged in to textivate.

TTS is available on all but a handful of textivate screens. The ones that don't have it are: Hangman and SpeedRead. (Also, the "no keyboard" versions of some of the activities have no TTS enabled.)

If TTS languages have been added to a resource, you should see TTS option boxes for any activities that you add to a sequence (except for those that have no TTS available; see 'TTS on activity screens' above).

You can turn TTS on and off for specific activities within a sequence. Note also the new 'switched' / 'not switched' option (as shown in the above image) available for some of the match activities, which allows you to specify which way round the match items appear in the sequence activity.

If TTS languages have been added to a resource, you should have the option to fine-tune link urls, embed code etc, to include TTS specification. (except for those that have no TTS available; see 'TTS on activity screens' above).

An embedded gap-fill. (N.B. TTS option box not shown because the configuration has been enforced):

A vocab matching exercises based on the same resource. This time the options are shown (because the configuration is initial, not enforced). Note that I've switched the items so that the French text appears first, along with the French audio:

In the following example, TTS works as a combined translation / dictation activity. It uses the same list of matching items as in the previous example above, but this time the items are not switched, so that the English text appears as the prompt along with the French audio:

This next example is not embedded, because it includes a parallel text. Follow the link below to see it. The English parallel text is useful to reinforce the meaning and to introduce a translation element, while the French text-to-speech adds a dictation element and reinforces the sound/spelling link:
Initial configuration only: https://www.textivate.com/frames.php?ext=6ovjn1&res=empty-6ovjn1s11
Enforced configuration: https://www.textivate.com/frames.php?ext=6ovjn1&res=empty-6ovjn1e11