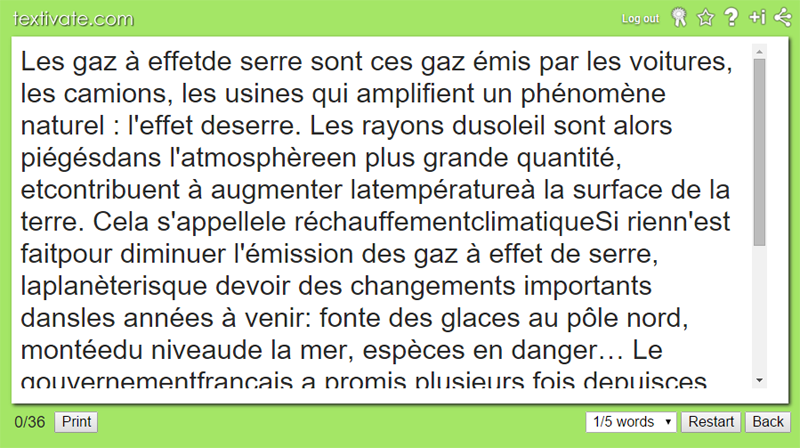 We've made an improvement to the "Space" activity (Separate the words), so that if your text has more than 20 words in it, you can now decide on the number of words to be joined up.

Why do this? Well, for a couple of reasons...

Firstly, for longer texts, the Space activity can be quite long and drawn out. Imagine a 300-word text, requiring a click between every word. It takes a long time to complete. Reducing the number of words joined up means the activity is much quicker. Set at 1/5 words, a 300 word text would only need about 60 clicks to complete.

Secondly, in a strange way it adds an extra element of challenge. You're no longer just starting with a block of text and looking for the end of each word. When the text appears with lots of the spaces and punctuation already there, you have to figure out which bits of text -- which may actually look like words -- are made up of more than one word.

You can fine tune urls when you share a link to a Space activity, and you can stipulate the number of words affected when you include Space as part of a sequence.

Here is an embedded example, about greenhouse gases, in French. 1 in 5 words are affected, so it only requires about 35 clicks to complete it (rather than about 180 previously) but it still requires the student to read the whole text, paying close attention to spellings etc.

(Edit: we've also now added a Hint button, which provides the next space, starting from the beginning of the text, but which affects the student's score.)

Note that in the embedded example above, the drop-down box is available so that you can change the number of words affected. This is because I have tweaked the url to set the initial configuration, but have not enforced it.

In the Spanish example below, I have enforced the configuration so that 1 in 3 words are affected: